Parents have shared the creepiest things their children have said to them, in an array of chilling stories.

The thread was kicked off by a nursery teacher on Mumsnet, who described how a toddler in her class predicted both her pregnancy, and that of her colleague.

The woman revealed the young girl had placed her hand on her co-worker’s stomach saying ‘babies’, weeks before the woman discovered she was pregnant with twins.

Other parents quickly shared their own spooky experiences of their own children seeing ghosts and recalling historically accurate memories that happened before they were alive. 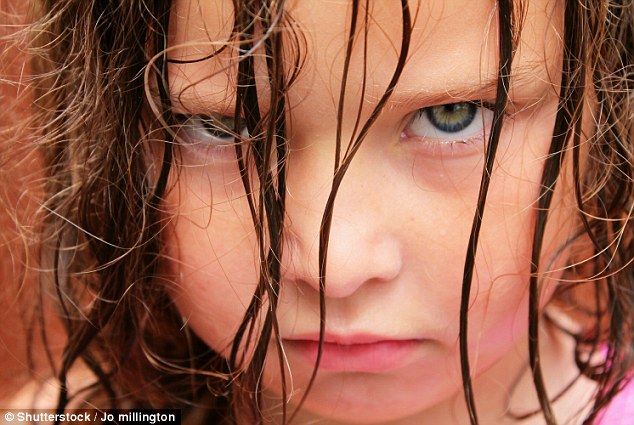 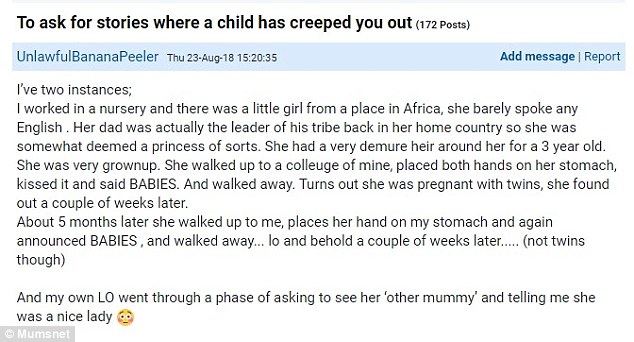 The woman revealed on Mumsnet the young girl had placed her hand on her co-worker’s stomach saying ‘babies’, weeks before the woman discovered she was pregnant with twins

Kicking off the thread, a mother asked for other parents to share instances ‘where a child has freaked them out’, writing: ‘I worked in a nursery and there was a little girl from a place in Africa, she barely spoke any English.

‘Her dad was actually the leader of his tribe back in her home country so she was somewhat deemed a princess of sorts.

‘She walked up to a colleague of mine, placed both hands on her stomach, kissed it and said BABIES. And walked away. Turns out she was pregnant with twins, she found out a couple of weeks later.’

She continued: ‘About 5 months later she walked up to me, places her hand on my stomach and again announced BABIES , and walked away… lo and behold a couple of weeks later….. (not twins though)’. 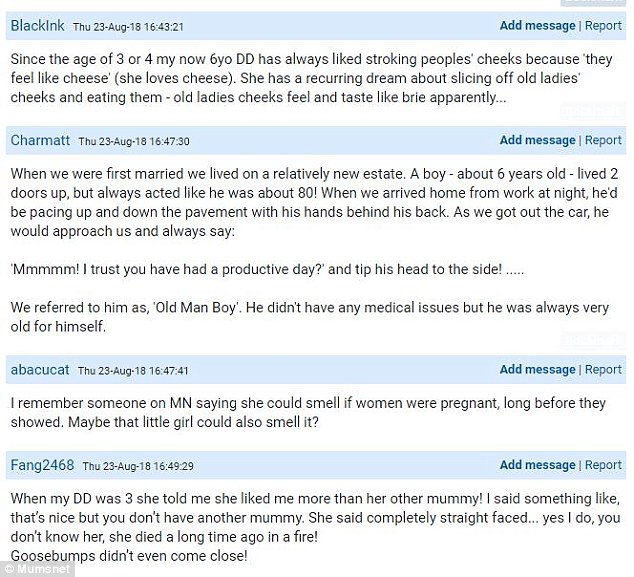 Meanwhile many parents shared the memories of past lives their children appeared to be harbouring, with one mother describing how her daughter told her about her ‘other mother’ who died in a house fire

And other parents quickly flooded the thread with their own experiences, with one writing: ‘Chum’s little boy, aged about 4, met chum’s work colleague for the first time and said chattily, out of the blue: ‘Are you sad because the tree fell on that man?’

They continued: ‘Colleague had been widowed some years due to exactly that. Chum had never mentioned this or discussed it anywhere near her boy.’

Continuing the theme of children who appeared to have psychic powers, another user told how their four-year-old sister hugged their grandfather and told him she wouldn’t forget him just hours before he passed away unexpectedly.

One woman described how she used to be a nanny and one child she was babysitting told her she would like to ‘wear her skin’, in the spooky thread posted to Mumsnet

Meanwhile, in another spooky incident, a woman told how her toddler son recounted a historical disaster explained to him by a ‘ghost’.

She wrote: ‘My son (then 3 he’s now 20) came down from sleep one morning and told me about a boat that had sunk on the Thames hundreds of years ago with lots of names and details.

‘We were laughing and asked him how he knew that and he said “Connor told me”.

‘We googled the name of the boat and it was indeed an incident. When we questioned him he said Connor was someone who came to talk to him at night from another place. We had lots of other facts “from Connor” over a period of about 18 months then he disappeared and was never heard from again.’

Another parent shared a similar incident, telling how their daughter appeared to predict the 9/11 attack.

She wrote: ‘One day when my second daughter was four she seemed to be concentrating very hard and showed me a picture of a long thin rectangle with black curls coming out of it. I asked her what it was and she said it was an aeroplane?

‘I later switched on the television to see the world trade centre towers on fire after 9/11. This was the first I knew about it. That really spooked me out as you can imagine’.

In the creepy Mumsnet thread one mother told how her daughter appeared to be able to see ghosts, admitting that she took the little girl to play in the garden until her husband was back

And one mother described how she took her eight-year-old son to her mother-in-law’s house when he described seeing a man walking up the stairs.

She added: ‘He described my husband’s father who had died very suddenly in the house just before we met.’

Meanwhile many parents shared the memories of past lives their children appeared to be harbouring.

One woman told how her son insisted they used to live in a house which burned down, writing: ‘Up until he was mid teens he used to refer to the ‘house we lived in that burned down, “you remember Mum – with the fire engines and ambulances and Police”. Never happened but he insists still that he remembers it. Creepy!’.

Another said her nephew insisted he had chosen his mum, writing: ‘When he was three nearly four he told his mum that he chose her to be his mum as she looked sad when he visited her and she looked like a nice mummy.’ 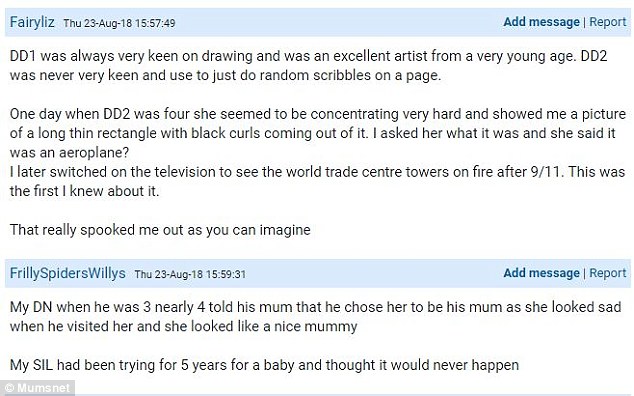 Another parent shared a similar incident, telling how their son appeared to predict the 9/11 attack, in a collection of paranormal occurrences parents had experienced with their kids

She added: ‘My sister-in-law had been trying for 5 years for a baby and thought it would never happen’.

And she wasn’t in the minority, with another adding: ‘When my dear daughter was 3 she told me she liked me more than her other mummy! I said something like, that’s nice but you don’t have another mummy. She said completely straight faced – ‘yes I do, you don’t know her, she died a long time ago in a fire!’

Meanwhile another added: ‘My dear son from about two until four, would talk about a previous life. Including names and locations. He would point to buildings and tell us what they used to be.

‘We checked them out. The names were real and locations etc were correct.’

‘Family had lived in that particular area for a number of generations. I think it’s inherited memory in some way.’

In the eerie thread shared to Mumsnet, many parents shared the memories their children appeared to have from past lives, and one little boy claimed he had a wife and kids

And another mother shared the moment her son recalled a memory from when he was just two weeks old.

She said: ‘He was born extremely prematurely and had a lot of very invasive treatment in his early days to keep him alive. He is quite severely autistic.

‘Not long after he became verbal, aged around 4, he startled us and completely creeped us out by starting to talk about things that had occurred when he was extremely young, including asking ‘why did they put those things in my back when I was two weeks old?’.

‘He’d had four lumbar punctures at exactly two weeks old, which we’d never mentioned to him.’ 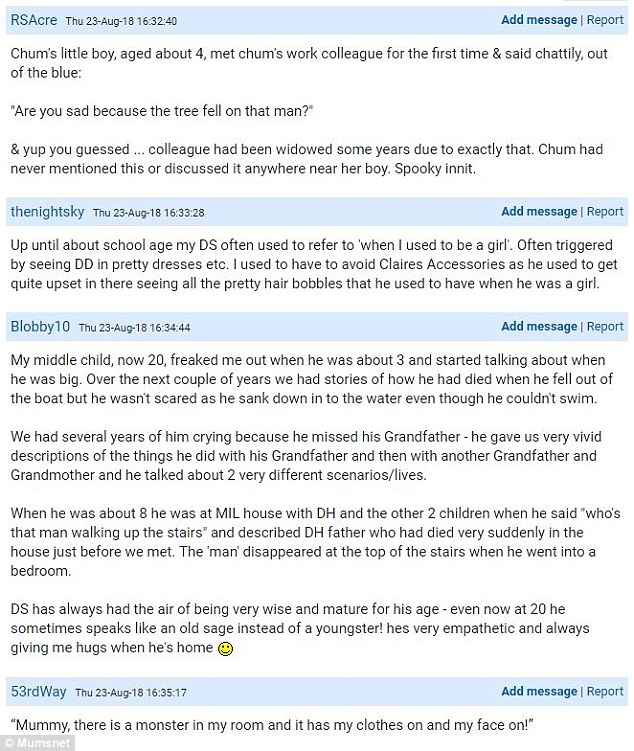 Joining the spooky thread, one user wrote: ‘Chum’s little boy, aged about 4, met chum’s work colleague for the first time and said chattily, out of the blue: ‘Are you sad because the tree fell on that man?’ They continued: ‘Colleague had been widowed some years due to exactly that.’

And in a final spooky tale a woman described how her boyfriend’s young cousin was haunted by ‘scratching sounds’ at night which in a real life horror story turned out to be his mentally ill neighbour plotting his death.

She said: ‘He used to complain of this horrible scratching noise coming from his wall just behind the headboard of his bed at night, he used to cry and refuse to go to sleep.

‘Fast forward a few years later, the police showed up at their door and asked them if they had ever had any problems with their elderly neighbour.

‘Basically she had died and when house was being cleared out they also discovered that this lady had some suspected mental health issues and for years believed my boyfriend’s cousin was Satan and convinced herself she had to kill him to save herself.’

She continued: ‘Her bedroom was on the other side of the wall and the scratching noises had been her trying to claw through the wall to get to him at night. T

‘She had kept a very detailed diary of how she could hear him playing through the wall so knew that was his room, time stamps of when he had been out playing in the garden as she watched him through the window and what he was doing.

‘His cousin’s parents still live in that house miraculously and his daughter who is only 7 told him she didn’t like playing in that house anymore as the scratching noises scared her having no knowledge of the previous events.’

Continuing the theme of children who appeared to have psychic powers, another user told how their 4-year-old sister hugged their grandfather and told him she wouldn’t forget him just hours before he passed away unexpectedly